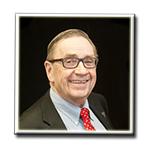 Lawrence is a native of Calgary, attended the University of Alberta where he received degrees in Science and Law.  He is a member of the Alberta Bar.  Lawrence was first employed by the City of Calgary and later was a senior executive in the coal, electricity and natural gas industries.  He moved to Richmond in 2002.  Lawrence is active in the volunteer sector and is the immediate past President and a Director of Volunteer Richmond Information Services and is a Director and Secretary of Volunteer BC.