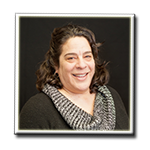 Judy is the Executive Director of Touchstone and has been in this role since 2015.  Over her 35-year career, Judy has held many different roles in social services including Child and Youth Care Worker, Foster Parent and Social Worker, all before landing at Touchstone’s Francis House Youth Wellness Program as the Program Director.  Judy’s role at Touchstone expanded when she became the Director of Operations overseeing all of Touchstone’s programs.  After over twenty years of learning about the agency and the clients served, Judy was welcomed in to the Executive Director role overseeing the direction of the agency. Judy is passionate about supporting families to be strong and resilient and believes that we strengthen family by building stronger and safer communities.

Judy became an agency trainer for Non-Violent Crisis Intervention as providing the best care, welfare, safety and security for everyone is extremely important when working with vulnerable and at-risk populations. Judy is passionate about Health and Safety and believes strongly in creating welcoming, inclusive and safe work sites.

In Judy’s free-time she enjoys long walks with her family, as well as skiing at her favorite mountain in the BC Okanagan – Big White.